It’s beginning to feel A lot like Christmas…so the song goes, and up and down the country I imagine that there are many women who like me are turning into that poor woman portrayed in the TV programme that resurfaces each year called The Grumpy Guide To Christmas and dreading the lead up to The Big Day. ‘Tis not the season to be jolly, but more probably Tis the season to be super stressing! 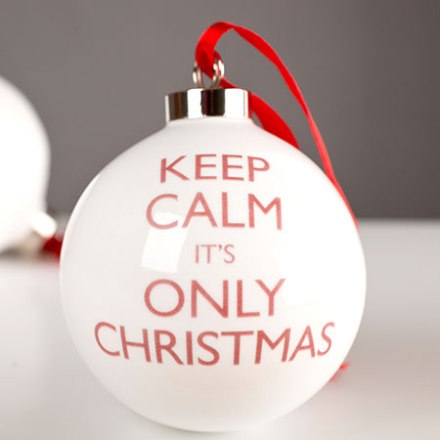 Every year at around September time when the first hint that Christmas is just around the corner becomes apparent when Christmas cards creep onto the shelves in the shops despite the fact that we are still wearing sandals, eating salads and probably enjoying an Indian summer. I, and probably many more women like me, decide that this Christmas will not be like all the Christmasses before and if we could we would actually prefer to cancel it altogether. What we really want to do is not  spend the shed loads of money, battle in the overcrowded carparks, streets and shops to buy gifts that someone might or might not like. We’d love to not bother with getting up at a stupid hour to get to the supermarket and armed with a mile long list, fill our trollies with enough food to feed a third world country and then get home to discover you forgot the essentials like cat food and loo roll, so you have to return again to the shop and stand with your two items in a queue that reaches the back of the store listening to Christmas tunes from the 80’s on a loop going on and on and on…

We’d rather not have to bother to decorate the house from top to toe to make it look wonderfully Christmassy. What’s wrong with just a tree and the odd Poinsettia dotted around the place? These days even the cloakroom has to have at least a festive looking Toilet Duck to remind us that even in the loo you can still feel festive.I’m just waiting for a loo roll holder to become available that cheerily chirps Ho Ho Ho’s everytime it dispenses a sheet of toilet tissues that is of course also festively decorated! How many times have we promised that the tree decorating time will be a happy family affair helped along with plates of homemade mince pies, jugs of mulled wine and carols playing softly in the background? In reality, tempers fray when the tree won’t stand up straight, the lights don’t work, the other half slinks off to do something more pressing like vacuuming the car, the kids disappear because tree decorating is just sooo boring, and the mince pies are curtesy of Mr Kipling, Mr Asda, Mr Sainsburys or if you are feeling a bit posh, Mr Blumenthal via Waitrose!

Every year despite promising that the big day itself will be a relaxed, no fuss affair, we end up doing a good impression of a Whirlling Dervish on speed from the minute we get up at some god awful hour to squeeze a turkey the size of an ostrich into the oven so it cooks through and won’t endanger your family with a post lunch dose of salmonella poisoning. Present unwrapping results in trying to squish half a forests worth of wrapping paper into an already half full recycling box and trying to look excited and pleased with the extendable brush on a pole to reach cobwebs that your beloved has given you. And yes, that really did happen one year!! We are our own worst enemies and have a tendancy to decline any offers of help declaring that we have everything under control and can manage very well  thank you very much! The next few hours are spent in a kitchen the temperature of the Sahara in mid summer trying to cook the turkey, roast potatoes, two kinds of stuffing, sprouts, carrots, braised red cabbage, roast parsnips, a vegetarian dish, pigs in blankets, bread sauce, cranberry sauce, gravy and a Christmas pudding thats been steaming since the beginning of Advent! All to be ready at exactly the same time! Is it any wonder we hit the Harveys Bristol Cream big time and get so hot that we emerge frazzled from the kitchen looking like a boiled lobster instead of Nigella or Delia!

I dread the stress and panic that starts pretty much once Bonfire Night is out of the way. Every year I decide that this is the year that Christmas will be no big deal and even go so far as not even bothering with a tree that no one apart from me really notices. Every year I make the decision to only give token gifts and for no more big presents. And every year I tell myself that I will definitely stop trying to make everything perfect, delegate and not beat myself up when the sprouts are too soggy or the Buck’s Fizz is too warm.

Do I ever stop stressing…no of course I don’t. This year will be the same as all the years gone by, and so will the years to come. After Christmas is done and dusted I have nine months of respite before it all starts over again! And on that thought can someone please pour me a Baileys and unwrap a Quality Steet chocolate for me. Preferably a purple one!

Frances Auty Bakes
Diary of a Twenty Something

Finding meaning in the small and mundane...

Home of the Renegade