We had to say goodbye to our beautiful, much-loved little ginger mog Dillon yesterday. We knew it was coming as he was such a poorly little chap, but having to agree with the vet that the kindest thing to do was to let him go was  heartbreaking. My little Dillydops would be no more, and I just wanted to pop him back in his basket and take him back home. But he was suffering and exhausted and that needed to stop. With a heavy heart I signed the permission form and within minutes the light faded from his eyes and he was at peace.

Dill came into our lives almost ten years ago. He was a rescue cat who had sadly been badly treated by his previous owner. We instantly fell in love with this beautiful, big, fat ginger mog. A total softie who had a habit of spraying on carrier bags and all things electrical. He was on a mission to mark out his new territory. We used a lot of Febreze and air freshener in those early days!

Dill loved cuddles and had this lovely habit of gently placing his paw on your face. He really was the biggest, daftest thing going ! A total failure in the bird or mouse catching department thank goodness, but was brilliant at devouring spiders and flies!

Mr R wasn’t too impressed with Dillon the first time he came to our house. Dillon wee-ed in his shoe! Actually he did it more than once. Never in anyone else’s shoes, just his. I have to commend him for being such a good aim, especially when weeing in boots! He also disgraced himself when he pooed on Mr R’s side of the bed! For many years the two of them had a bit of a love hate thing going on !

Slowly over time my big strong lad started slowing up. At first he stopped scaling high walls, and then he couldn’t manage leaping up onto work surfaces. Climbing the stairs became an effort and the spiders and flies were too quick for him and were at last safe from his razor sharp claws. Teeth were lost and his muscular frame diminished. He was, as we all do eventually, getting old.

We returned from a holiday last November to find our lovely boy struggling for breath. He was admitted into hospital and diagnosed with congestive heart failure. We brought him home with his breathing improved but knowing that he was living on borrowed time and the outlook was grim.

For the last three months he has been cosetted and spoilt rotten. No longer did he have to brave the cold to have a wee or poo as he was given a litter tray. He ate and drank all the things he loved best and was given cuddles galore. Over the last week though his health deteriorated rapidly. Everything was such an effort. He found eating a struggle and any exertion left him gasping for breath. He had become so skinny and a shadow of his former self. Leaving him at night we wondered if he would still be with us the next morning. We knew it was time to phone the vet. In our heart we also knew that this would be the last time he would leave the house never to return.

I miss my boy. I want him back. I want my handsome, loving ginger mog back so much it hurts. But he’s in a better place now, back to catching flies and spiders and probably marking his new territory to his little heart’s content. 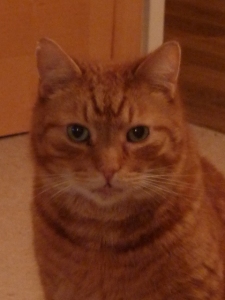